Meeting postponed – THE CAMPAIGN FOR A DEMOCRATICALLY ELECTED MAYOR OF CROYDON 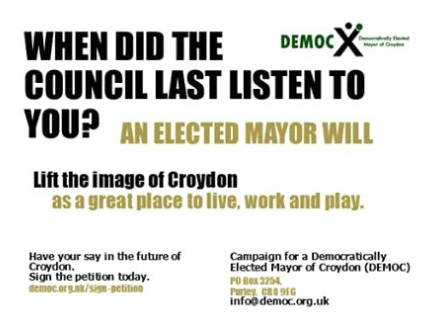 (plenty of parking; a few minutes’ walk from East Croydon Station and nearby bus routes)

Come and find out more about the campaign and ask your questions.

This is one of a series of Campaign Launch Meetings. Over 500 people have attended previous events and two have been at full capacity. RSVP to chair@democ.org.uk to reserve your seat or just show up on the night.

Over 13,000 Croydon voters have already signed our petition calling for a referendum to give Croydon voters the chance to replace the role of Leader of the Council with a directly Elected Mayor. The campaign, which is not politically aligned to any party, is supported by 7 Residents Associations and both The Conservative Party and The Croydon South Labour Party.

We believe that the Council is not listening to residents and not taking proper account of their views and is too frequently acting without the consent of the people of Croydon and of our local communities.

There is a good underlying reason why residents are not being listened to by the Council. Out of 28 electoral wards, only 4 are marginal and ever likely to change hands. That means most people’s votes in a local election make no difference to the outcome.  No wonder the Council doesn’t listen to most of us. They don’t need to!

The Council Leader, in charge of our town, currently becomes Leader as a result of the votes of just 21 Councillors from the winning Party.

A Democratically Elected Mayor will be chosen by all of the voters, about 270,000 of us. When electing a Mayor, every vote from every Croydon voter will count equally. Every one of those votes will matter to the candidates. An Elected Mayor won’t get voted in unless they have the confidence of most of the voters of Croydon. An Elected Mayor who doesn’t listen to residents can be voted out of office by the people of Croydon after 4 years. This will improve accountability and democracy.

As our Town is growing rapidly, we may soon have 500,000 residents. We will benefit from the enhanced status an elected Mayor brings. Someone to stand up for our town as Andy Burnham stands up for Manchester.

Bedford, Bristol, Doncaster, Leicester, Liverpool and Middlesbrough all have Elected Mayors. Hackney, Lewisham, Newham, Tower Hamlets and Watford all have elected mayors. SO SHOULD CROYDON

Come and join us on 16th April, ask your questions and find out more.

Campaign for a Democratically Elected Mayor of Croydon “DEMOC”