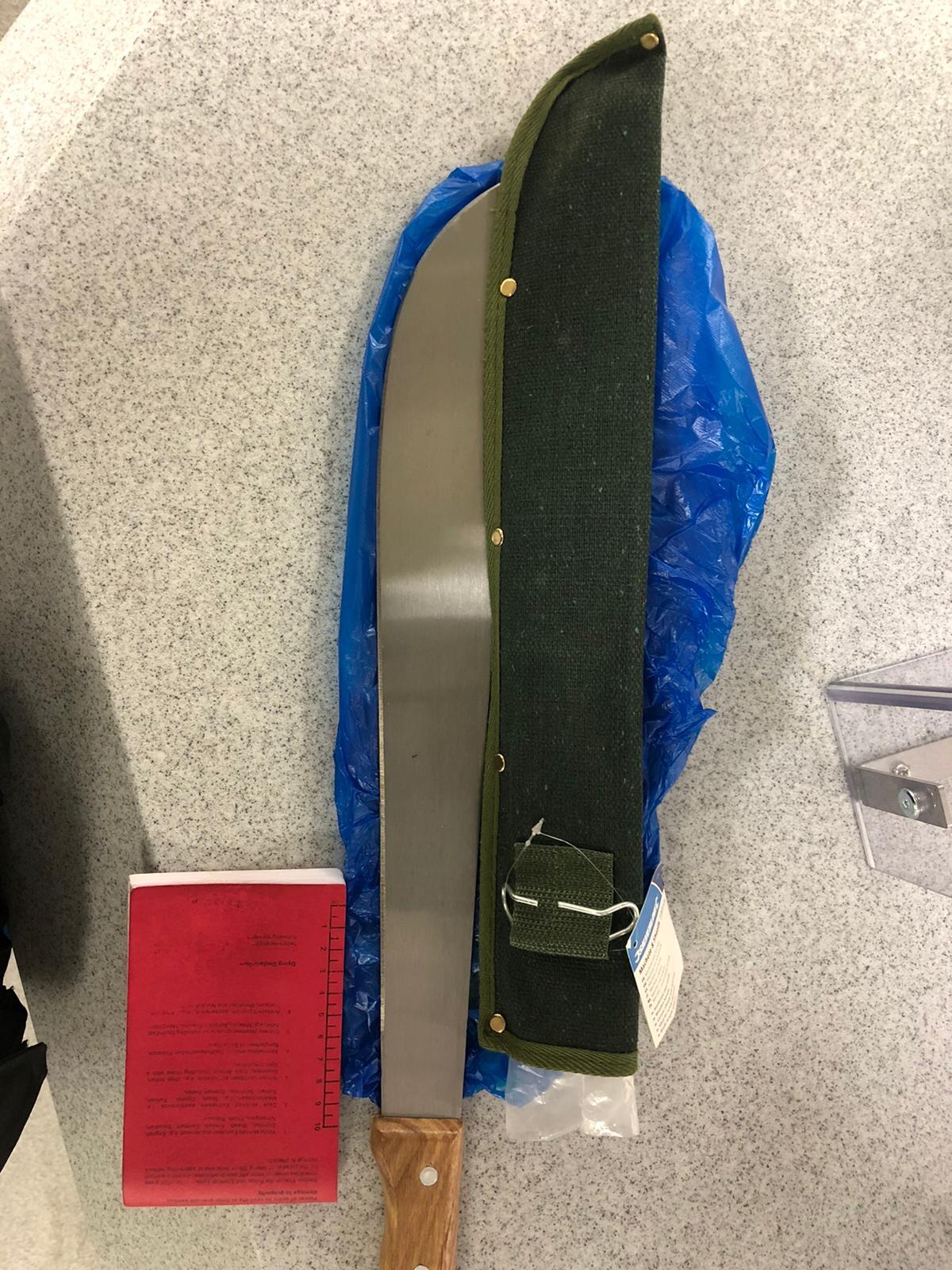 We are currently enduring a challenging period and many of your local Croydon officers have been drafted into central London to deal with the BLM protests. There are further protests and demonstrations planned across the capital this weekend, with two locally in Croydon. ‘Peaceful protests’ have now led to 62 officers being injured however my colleagues will continue, as always, to maintain the peace and protect the public.

Across Croydon my teams continue to fight crime and I’ll share a few stories of their work:

Broad Green – The team arrested a male on London Road in possession of a machete (pictured). The suspect has been charged with the offence and will appear at court.

Fairfield – Officers arrested a male who smashed the windows to a health centre in Edridge Road causing distress to the staff inside. He has been charged with criminal damage and will appear in court. The team were also on patrol in an unmarked vehicle when they were overtaken by a rather aggressive driver on the High Street. The officers stopped him to discuss his manner of driver and it became apparent he was uninsured. His vehicle was seized and he was reported for the offence.

Op Basswood – Officers have been deployed this week to target catalytic converter thefts, which has seen an increase again as the lockdown has been eased. Currently the south of the borough, particularly Purley and across into Wallington, seems to be the main target area but we have seen offences also in Selhurst. The officers have been proactive stopping vehicles that fit the profile and have made several arrests this week, albeit unrelated. One group were an organised shoplifting team who were stealing bottles of spirits from large supermarkets throughout Surrey into Croydon; and the other had a large amount of cannabis (pictured). This morning finally a good result and two offenders have been arrested for catalytic converter offences and will be interviewed today. I do see a lot of quality images shared on social media, but quite often these do not make their way to the Police. Anything catalytic converter related please email opbasswood@met.police.uk

Vehicle thefts – There have been several reports of Ford Fiesta/Focus stolen without keys, and I have also seen footage of a BMW being driven off a driveway also without keys. These are all new style cars with keyless entry and ignition. Essentially the signal is boosted from the keys inside the house to the car outside, with a separate device. I was amazed and appalled at the same time as it was a very quick process. If you have one of these cars, please do not keep your keys near the front door. I would suggest purchasing a Faraday pouch, but if not then place them in a drawer or a metal tin. These vehicles are being stolen to facilitate further crime most usually catalytic converter theft, vehicle crime, metal thefts or burglaries.

Shed burglaries – We are seeing a trend of sheds broken in to across the borough usually for tools or machinery. Although sometimes not possible please limit access to your rear gardens and try to place a substantial lock on the shed.

I have seen several comments as to why I don’t answer all the questions on my posts. The answer is straight forward – I have a lot of Police work to do!

As always thank you for your support. Have a good weekend and stay safe.