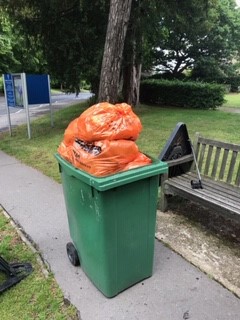 Park Hill Residents Association held its first summer litter pick on 16 June. Despite the weather, 18 residents collected 23 bags, as well as some number plates, a hubcap, and an abandoned road traffic sign. That was slightly down on January’s 26 bags. It would be nice to think it is because plastic is becoming unfashionable, but more likely it is because some residents pick up rubbish as they spot it. Many thanks to them and to all who took part on Sunday. We don’t have the usual picture of bags as Veolia were too efficient and started to load the lorry before the photo shoot, but this wheelie bin full shows the first load of bags.